Inflation is one of THE most important topics there is.

Inflation is one of THE most important topics there is. And yet, it’s probably one of the most misunderstood. What we don’t understand, we cannot fix. This is Inflation 101, a thread

Before we dive in, a note on the importance of this topic. Inflation is a BIG deal. Runaway inflation is cited to have caused: 1/ The fall of Rome, 2/ Hitler’s blaming of the Jews leading to the Holocaust, 3/ And many wars. Wondering why? Let’s dive in:

What is inflation? ~ Before we get too far, a basic explanation. Inflation is when prices of goods/services increase and the value of money declines. With inflation, one unit of currency purchases fewer things. Those holding the currency have reduced purchasing power. 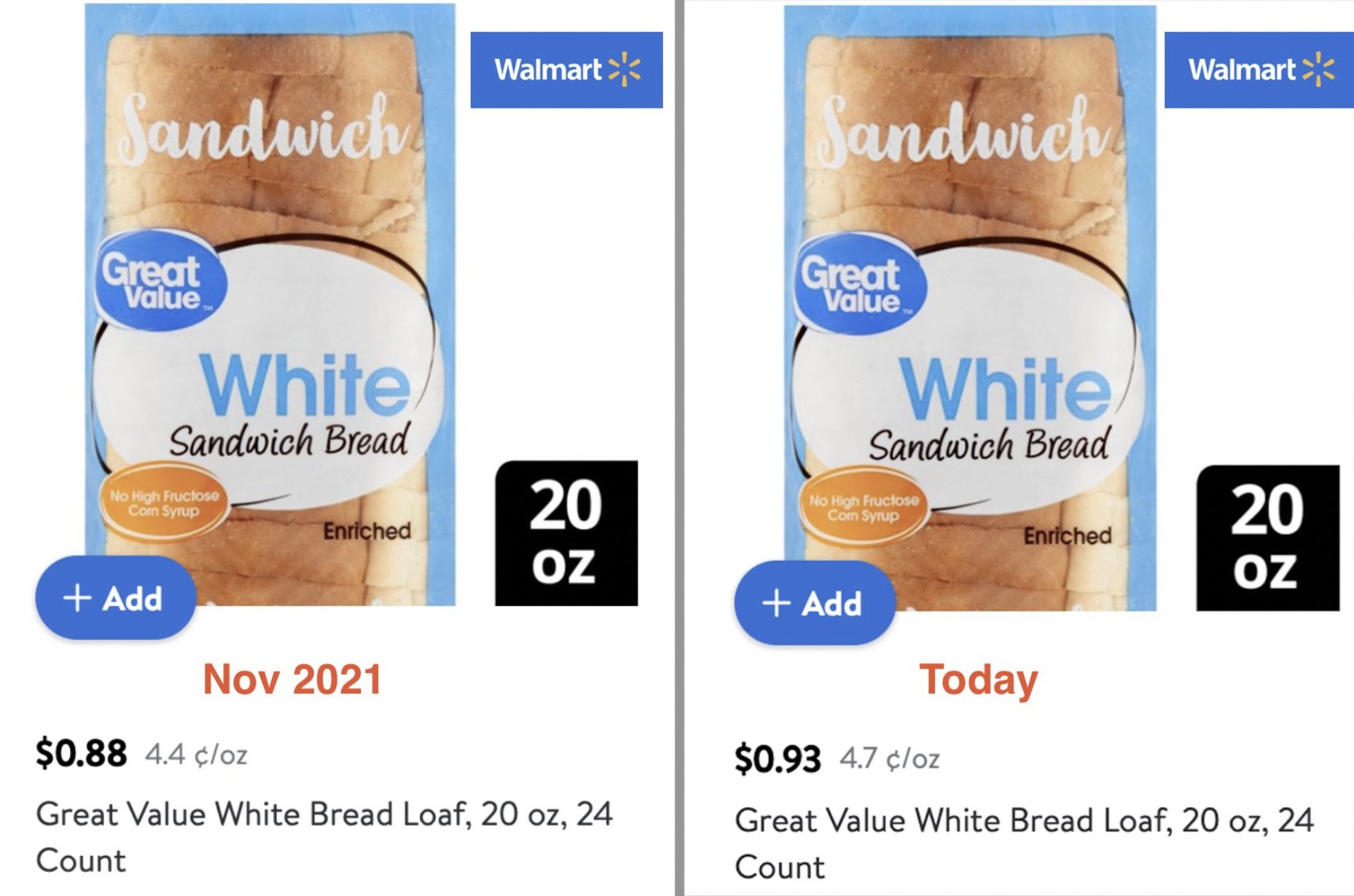 Here are the Effects when this happens: > Prices rise due to increases in cost of raw materials, wages, and inputs to production (Cost-Push Effect) > Consumer demand increases due to greater supply of currency and credit (Demand-Pull Effect) Both accelerate inflation.

For example, see this NYTimes article explaining inflation. They mention the Demand-Pull Effect with no mention of the Root Cause of money supply increasing. This intentionally misleading explanation benefits from the fact that most readers know so little about the topic.

~ How money is printed ~ Printing new money is a convoluted process. But in short, the Federal Reserve, the U.S.’s central bank, is in control of the nation’s monetary policy. It has authority to increase money supply.

Technically speaking, the Federal Open Market Committee votes on the policy. The FOMC is a private entity not voted on by the public, consisting of the members of the Fed Board, the president of the NY Fed, and four other regional Fed Bank presidents.

When the FOMC decides to increase the money supply, it happens. They are able to effectively make money appear out of thin air. And most of this is digital; a tiny amount is also printed by the US Treasury. So… how is this accomplished mechanically?

Three ways: 1/ “Open market operations”, which is mostly purchasing IOUs from the government. 2/ Lending money to the banks (at an interest rate, which when lowered increases money supply) 3/ Decreasing the reserve requirement, allowing banks to lend even more money.

Common sense suggests that #2 and #3 generally will rebalance over time. With #2, the money must be paid back to The Fed unless there’s a default. With #3, there will always be a minimum reserve threshold.

However, in April 2021, something significant happened regarding #3. Historically, the reserve requirement was always roughly 10% meaning that for every $9 a bank loaned out it had to keep $1 in reserve. It has been this way since April, 1992. And for decades prior, it was 12%.

What happened in April 2021? The reserve rate was set to 0.0%. Banks can now loan out as much as they want, to whomever they want, with any amount kept in reserve. There was minimal media coverage of this historic event. 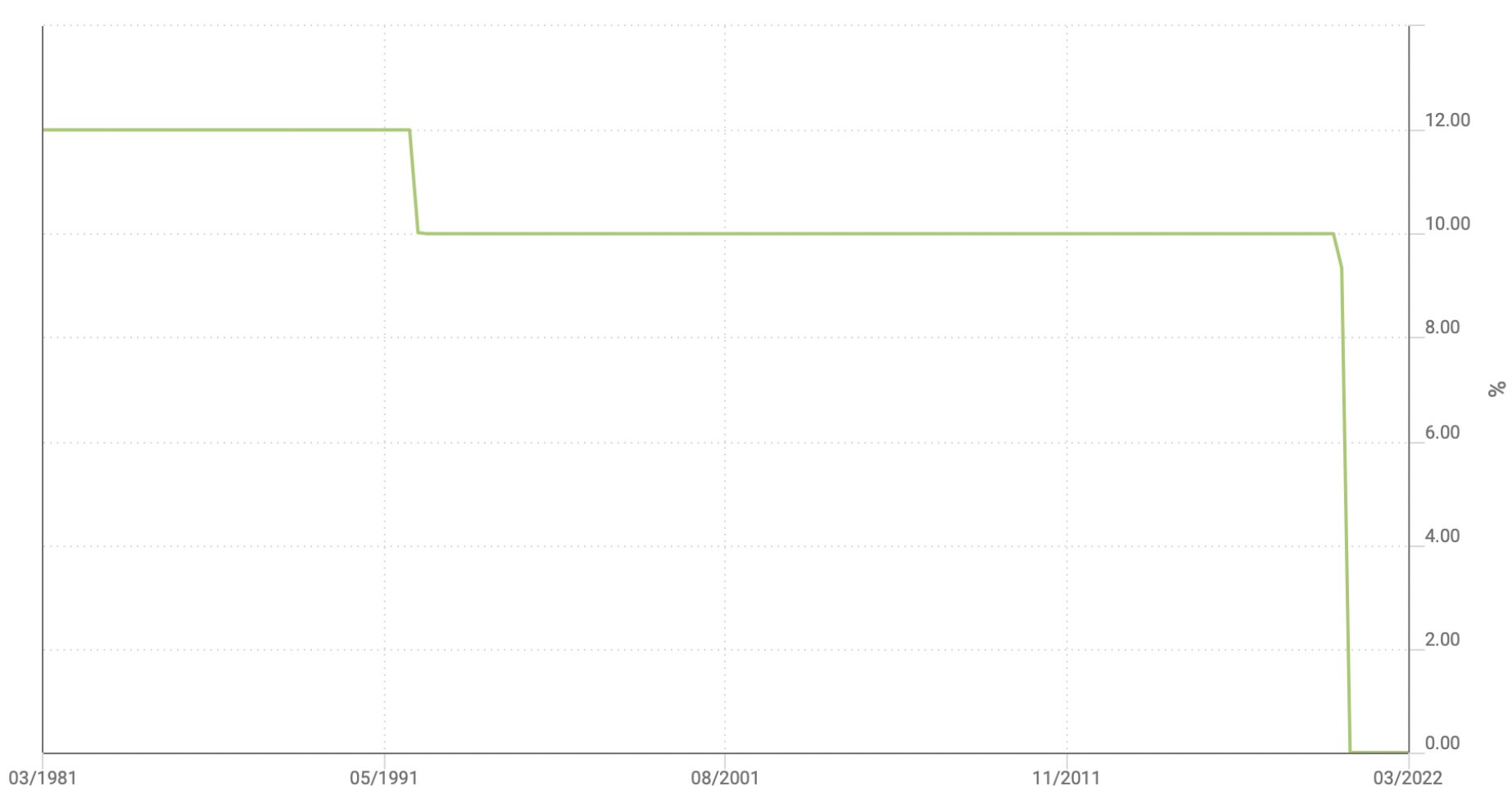 Now back to #1: Open market operations refers to when The Fed prints money and uses it to purchase securities, thereby flooding the market with more money. Here’s the key part: when The Fed purchases these bonds, it’s using digital dollars that it created with a keystroke.

These digital dollars go into the government’s actual bank accounts. And then they actually get used in the real world. Usage spreads it around. Most of these securities purchased by the Fed are notes and bonds issued by the US government via the US Treasury.

These securities mostly take the form of Treasury notes or bonds. In other words, IOUs from the government. These IOUs are backed by the full faith and credit of the US government.

Treasury notes and bonds are purchased as low risk instruments by individuals, corporations, and all types of investors. The trust in the US government is what ultimately makes them low risk.

The Fed sometimes sells the securities they hold to reduce money supply. However, they buy far more than they sell. The Fed currently holds ~$9T in these assets, up from ~$4T since March of 2020. See chart via 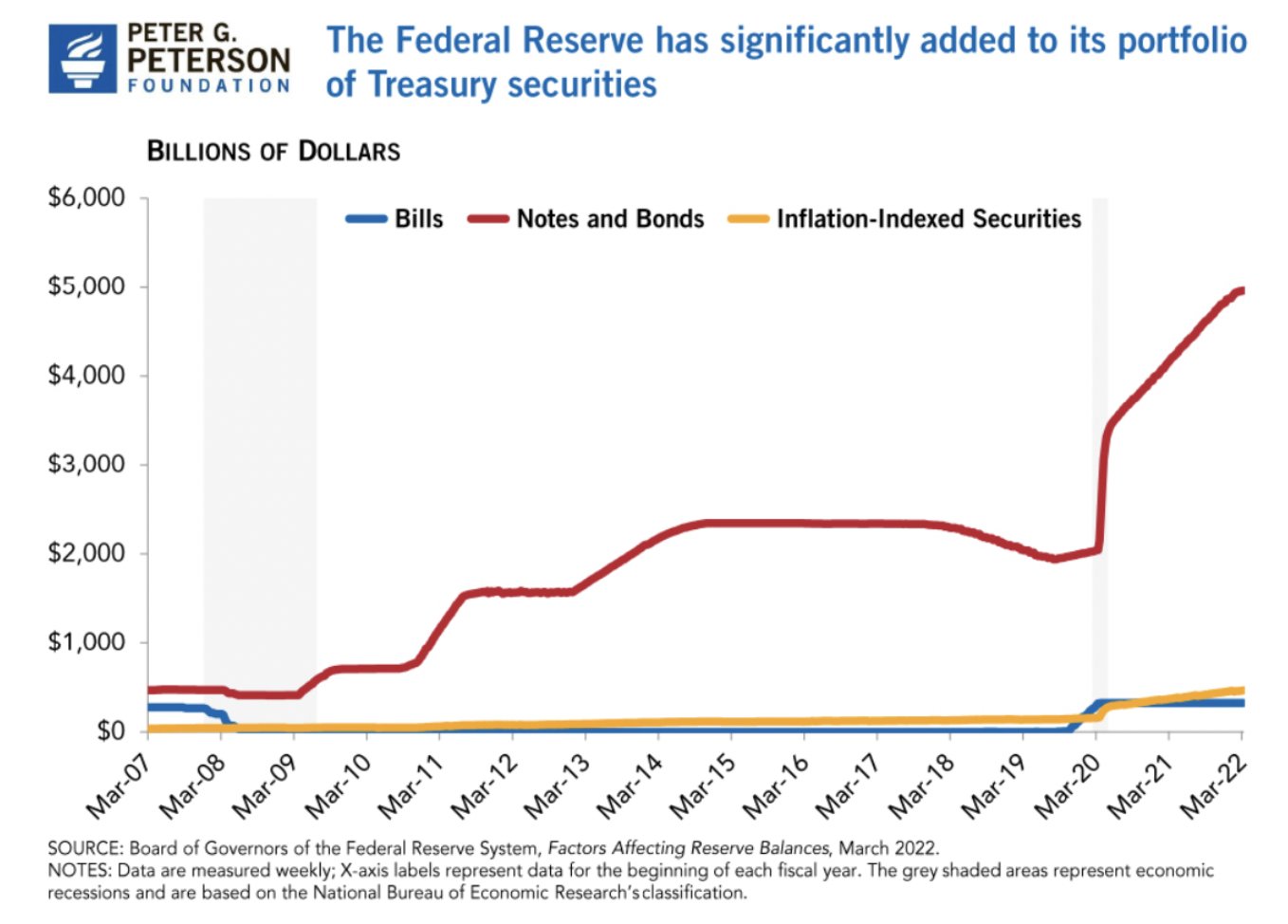 This is perhaps one of the most alarming developments. $5T more dollars are in circulation than March 2020. This is in large part why the annual inflation rate in the US accelerated to 8.5% in March of 2022. This is the highest annual inflation figure since 1981.

This is also far higher than the Federal Reserve’s target inflation rate of 2-3%. Fun fact: the number comes from a New Zealand policy in the late 1980s:

Anyhow, this significant overshooting of inflation is caused by the new $5T in circulation, zero reserve requirement, and increased deficit spending. All leading to rapidly expanding money supply.

Some might blame covid, the shut down of the economy, and the need to print to stimulate the economy. All fair reasons. Shutting down the economy was absolutely punitive. But was it absolutely necessary? That’s for you to decide.

Recently, the Federal Reserve has started buying long-term bonds (IOUs) from the government that may not need to be paid back for 10-30 years. This is known as Quantitative Easing, and is an unconventional monetary policy used to dramatically increase the monetary supply.

To paint a picture, the US government owes the Federal Reserve over $5T in long-term treasury notes and bonds alone. The US government needs the capital because it spends more than it makes.

In 2021, the federal government collected $4T in revenue (predominantly via taxes) but spent $6.8T. The $2.8T gap is called the deficit and is funded through government bond sales (IOUs). However, the $2.8T gap is just for the year 2021.

The total US government amount owed in these IOUs is $30T. This is 150% of our entire annual GDP of roughly $20T.